Robin was diagnosed with bladder cancer in 2013, and had a radical cystectomy and a neo bladder in early 2014. He also coached Team GB Olympic gold medal winning rowers at Rio 2016. 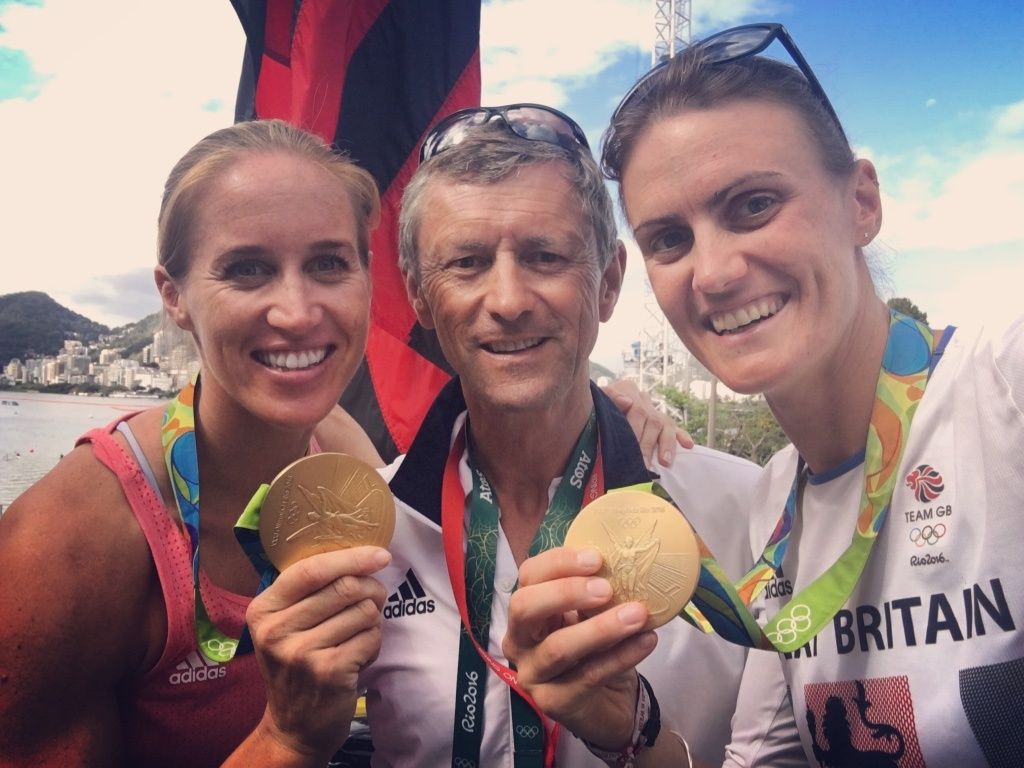 I expect most people are familiar with the idea of a ‘bucket list': you write down a list of things you want to achieve in life, big and small, and then set about doing them one by one. In 2012 I was able to tick the biggest one on my list, at least in my working life, because the Great Britain Olympic Rowing crew I had been coaching for two years won an Olympic Gold Medal.  Helen Glover and Heather Stanning were both young female rowers achieving a career peak in that moment and it was also special because it was GB's first Gold of the Games, and the first ever by a British women's boat.  For me I had spent 20 years as a rower and another 20 or more in coaching with men, women, students and open clubs, working my way up and gaining some European and World success but so far not Olympic. To realise that dream in August was significant to say the least.

At this point, Cancer was not part of my life, it was something unfortunate that had afflicted one or two family members and one or two friends but not me.  It was remote.  I felt I was an unlikely candidate for illness generally because I had always had a healthy life and no reason to consider myself at risk.  I used to be an international rower myself when younger and I have never smoked, drink only a little, am not overweight, eat sensibly and do exercise, and at 53yrs good health was still statistically in my favour.

Jumping forward four years from the London Olympics to August 2016, Helen and Heather rowed a magic 2000m final in Rio de Janeiro to retain their title in the Women's Pair and help GB finish top of the medal table in Rowing.  It was a fabulous Olympics as you will remember.  I had coached them throughout the six years since pre-London but in between the two Olympics I had the experience so many of us ignore and secretly dread.

At the end of 2013 we had returned from the World Championships in Amsterdam as World Champions and in November we were beginning the 2013/14 winter with a cycling camp in Mallorca.  I was still fit and enjoyed doing some of the rides with the group of athletes, but this time it didn't feel right.  I lacked my usual energy and found some blood in my urine. On my return to the UK I suspected a urinary infection and saw my GP as most people would do.  She prescribed anti-biotics but after two weeks it was still happening.  I began to think about kidney stones or something else to explain it and was not unduly alarmed when she fixed up an appointment at the Royal Berkshire Hospital in Reading.

Given the long time scale I have described with my rowing work, things health-wise now happened very quickly.  A first cystoscopy revealed little but was a new and unpleasant procedure for me.  It felt undignified and while the Urologist was totally familiar and unfazed, it was the first time anyone had ‘scoped' inside my bladder or even examined me down below.  Nevertheless, he decided another one under general anaesthetic was needed in order to get a more thorough look and whereas you can often expect several months to elapse between NHS appointments for certain treatments, the appointment for this came through within days.

I think it is quite important to not move too speedily past all this because I know that as each subsequent stage was reached and each decision point came the thing I craved was advice and people to talk to.  As it was I researched a lot on the internet but always felt a step behind in my understanding.  When I came around after the second cystoscopy a doctor was shortly on hand.  He had a good bedside manner but the words were still a shock: "We found a tumour in your bladder...there was also a diverticulum [pocket or bulge]...we removed the tumour [sigh of relief]...but there is what we call CIS or Cancer In Situ".  What that meant was that I had cancer in the bladder wall as well as having had a tumour.  He explained that this is risky and can spread easily, and if it does then it is certain to be fatal.  The solution they recommend is a removal of the bladder, called a Radical Cystectomy.  My mind was racing, still digesting the first words he had uttered and the use of the word ‘Cancer' - ME, CANCER.  How could this be?  In the operation to remove my bladder they wanted to remove my prostate gland as well, seminal glands, and as many lymph nodes as they could access to limit the chance to re-occurrence.  Nerve damage was likely meaning loss of erections.  At this point you feel your life is moving quickly out of your own control and in to the hands of others.  ‘It will kill you'.  The phrase stuck with me.  I had to accept that this was fact. Nevertheless, they were supportive when I said I wanted a second opinion and I arranged one in a London hospital the following week.  The advice was the same.  I spoke on the phone to three other cancer specialists and all said the same thing: remove the bladder.

When you are faced with losing your bladder you of course want to know how things will be afterwards.  The response was actually an encouraging one.  I could have a neo-bladder.  I could still have a bladder, inside me.  I didn't need to have a bag.  This is a personal decision for each patient and I later met one who opted for the latter, but for me I wanted things to be as close to my previous life as possible.  The specialist Cancer support nurses were a real resource and put me in touch with the Reading Bladder Cancer Support Group.  I spoke with two members about the whole scenario including the neo-bladder and life afterwards and this provided some reassurance.

The process became quite surreal.  I felt completely well at this stage and on the night before my operation in January 2014 I walked in to hospital with my wife at my side, carrying my bag as if checking in to a hotel.  There was some information I had had to accept ahead of this moment: I would struggle with incontinence for a period after the operation or perhaps permanently; I would probably lose all sexual function for ever; I would need up to 6 months off work to recover.  This was going to challenge me in lots of ways but there was the inescapable fact that this was all necessary to survive and it is amazing how accepting you become of a new situation when the alternative is death.  But there and then I felt like a healthy person checking in to the ward under false pretences.

The operation is a fascinating one and lasts some hours.  Using two feet of my small intestine Mr Shah, my surgeon, was able to move the tissue across my abdomen to form a new bladder complete with its own blood supply and connect it to my kidneys and ‘pee-pipe'.  The nurses who helped me through recovery were wonderful - you have drips, drains and tubes emerging everywhere and the bladder needs regular flushing.  It takes time for your gut to begin to work again.  This is the NHS at its best and I still feel huge affection and gratitude for the care they offered.  The six months' recovery I managed to shrink to nearer three, partly because I am self-employed and could not afford to be off work and partly because I was highly motivated to re-join the rowing team and Helen and Heather in particular.

2014 was a tough year but gradually I was able to resume a near normal life.  I needed daytime naps for some months and it took time to improve the incontinence situation but it does get better with work.  In the September of that year they became World Champions and holders of the World Record for their event.  I was challenged by my employers about my readiness to do my job again but coming out of Cancer makes you stubborn and focussed on life so I was sure I could do it.  In 2015 they qualified for the Rio Olympics and in 2016 they completed their unbeaten four years with their second Olympic Gold Medal.

Before the Games I had already made plans with my family about the next stage of life, the next items on the bucket list, and am actually typing this from our sailing boat off the coast of Spain in the Mediterranean Sea.  With the support of our two grown up kids my wife and I have rented out our house, dedicated some of our savings, and are having a gap year...maybe even two!  I think we wanted to do this anyway but my encounter with Cancer confirmed our thinking and determination to make it happen and every day feels like a gift.  I am now three years post-operation and so far, everything is clear.  The longer it goes the more the chance improve.  Some things will never be as they were and in other ways there are benefits: I don't like wasting time, I like to feel like I have achieved something every day and I dislike pettiness. Life is too short, even without Cancer!